The error code 0x800704C8 mostly occurs because of two reasons. Either the system files/Windows 10 image has become corrupted or you don’t have adequate permissions to perform the copying operation. Upon receiving this issue, you may get the following error message. 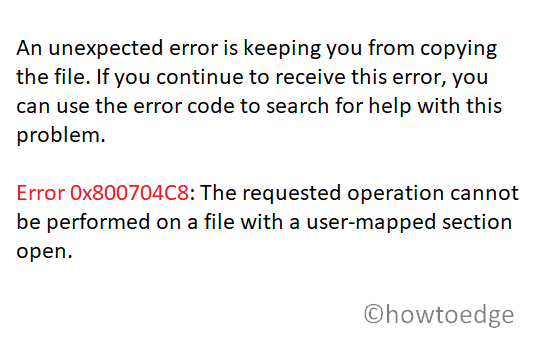 In this tutorial, we have come up with five solutions that should fix this problem. They are as follows:

If you are getting an error code 0x800704C8 while copying files on Windows 10 PC, attempt applying the below solutions –

1. Take ownership of the file

If you don’t have the required permissions to copy/move the files or folders in Windows 10, such issues are bound to occur. In order to fix this, you must take ownership of the file using the below guideline –

Now that you have the essential permissions to copy/move the files or folders, try performing this basic operation.

2. Run Visual Studio as an administrator

In case of receiving this issue yet again, you might not be authorized to do so. To fix this, right-click on Visual Studio and hit Run as administrator. Or, simply create a Properties rule that forces this app to always start having admin privileges.

Right before installing third-party apps, we grant them almost all permissions and they rightly do so by modifying the system files. External antivirus software is known to interfere with the core system files and folders.

Such interferences may prevent Windows from performing its basic operations. As a result, you get this error code 0x800704C8 “The requested operation cannot be performed”.

This might not be the case for premium antivirus programs. However, as they are going to use a lot more system resources than Windows 10 itself, we recommend not installing any such application. If you are already using a third-party application, make sure to uninstall it completely from your device.

After you remove the external antivirus successfully, restart your PC so as to delete any leftover files as well. From the next logon, you will not get any issue while performing basic operations like copying files or folders on Windows 10.

The error 0x800704C8 may also occur if you are using the default antivirus by Microsoft i.e. Windows Defender. In such a case, all you require is to disable the Virus & threat protection and see if it resolves the problem.

Since the problem here is corrupted system files or the system image itself, you may correct them by following these easy steps –

Note: After you initiate an SFC scan, make sure not to terminate this process. In case you do close or halt this process, there may start appearing some additional bugs or errors.

If you are still facing issues while moving files on your computer, initiate a DISM scan. Unlike SFC, this tool requires an active internet connection with good downloading speed. Here’s how to perform a scan using DISM –

Note: Running this code will replace the corrupted Windows file instances with healthy copies downloaded over the internet. So, make sure to remain connected to a good-speed network.

If the error 0x800704C8 persists even after applying the above workarounds, your PC requires a more rigorous approach. Basically, one or more components of Windows 10 have become corrupted and you just can’t go on and on.

So, you better reset all of the components via performing an in-place repair or simply install a fresh copy of Windows 10. If you ask me, the second one is the most viable option.

I hope by now, you are able to resolve the 0x800704C8 issue while copying files in Windows 10. If you do have any queries or suggestions, let us know in the comment section.

Disk Management is not opening in Windows 10