A new cumulative update ‘KB5005103 ‘ is now available for Windows 10 version 1909 that promises quality fixes and improvements to your device. This is basically a non-security patch update and you need not install this on your computer unless you are facing some problems or think of it otherwise.

In this post, we provide all the key highlights, fixes, and improvements that came along with this optional update. Go through the below list of new features and decide for yourself about installing this cumulative update.

After installing this non-security patch, your device will receive the following fixes and improvements –

In addition to the above fixes, KB5005103 brings the following changes as well –

As of now, there are no known issues with this patch update.

By default, this update gets downloaded/installed automatically if you haven’t set your PC as a metered connection. In case you have not received this non-security update via Windows update, use these steps – 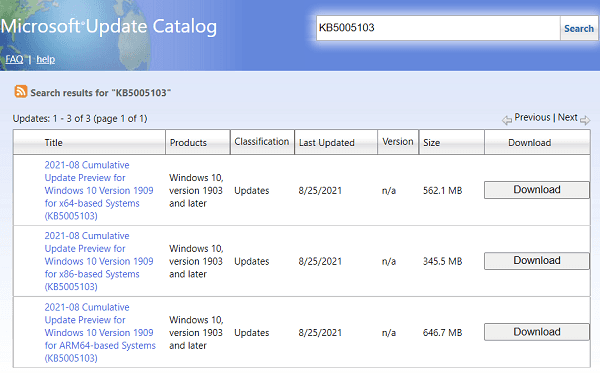 Note: Before you install this non-security update, make sure to download and install July 13, 2021, SSU (KB5004748) on your computer. If not, the update process may fail or get into some other problems.