Last month, Microsoft releases the highly-anticipated Windows Terminal 1.0 to its users. A few days back, they even announced a roadmap for Windows Terminal 2.0. This looks like they are going to soon replace all other command-line based programs like – PowerShell, Console, etc. Windows 10 users are excited too as the Windows Terminal Preview 1.1 brings lots of fixes, a smooth interface, and so many other cool features.

Windows 10 users may now use the right-click functionality to open any file or folder inside the Terminal. Just note that this will launch the Windows Terminal containing your default profile in the directory. 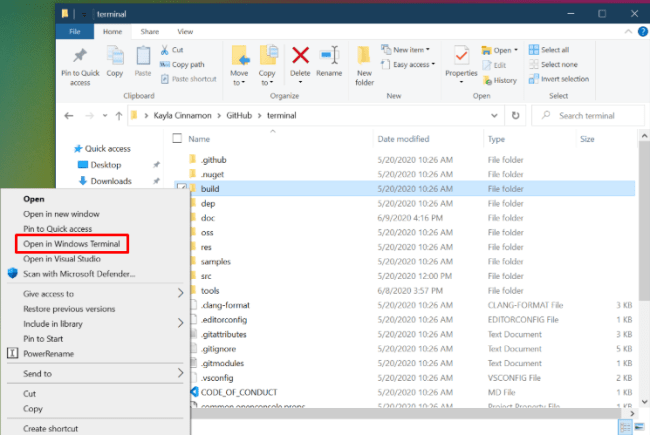 There are a few bugs as well on which they are currently working and expect to bring an update by July 2020 end.

They have added a new setting using which one can start the Windows Terminal right at the Windows startup. All you need is to set “StartOnUserLogin” to “true” inside the global settings.

Note: If you have disabled the Terminal startup task entry using the organization policy, the above changes won’t reflect back.

Just like in Terminal 1.0, users may now use the dropdown menu to open multiple panes on the current window. To do so, use “Alt+Click“. Just keep on clicking the above combination and the profile splits automatically on the active window or pane.

Users may now color the tabs as per their choice on Windows Terminal preview 1.1. To do so, use the below steps –

Note: One may even expand the menu to pick a color as per hex code or RGB fields.

The selected color will persist only for the terminal session. The moment you get out of the window, the color fades to the default as well.

Right on the color picker context menu, one may choose to rename the tab. If you do change the name, the tab title changes into a text box containing the “new title”. Again, this too lasts for a single terminal session.

The experts included a compact tab sizing as an option for the tabs in the “tabWidthMode” global settings. Using this feature will shrink all other tabs to the width of the icon. Thus it leaves adequate space to display the full title of the respective Tab.

The developers add three new commands to use as arguments while using the “wt” command line. They are –

Quick Note: In case you have installed both Terminal and Terminal Preview on the computer, the “wt” command will represent only Windows Terminal, not the later one. However, you may stick this to the Preview app following this tutorial.

Use Keyboard to open defaults.json

The developers added a new binding key to open defaults.json file i.e. “Ctrl+alt+,“. You may now use the below commands to open different files –

They have added the below code inside the .json files –

They address the following issues on Windows Terminal Preview 1.1 –

That’s would be all!

How do I manually recover deleted User Profile in Windows 10