Terminal 1.0 is out last month and Microsoft already started working on its new project i.e. Terminal 2.0. As per the sources, it is expected to come by the end of next year’s spring. Github presents a Roadmap that includes Windows Terminal 2.0 milestones, scenarios (features) along with known issues. Furthermore, experts include a list of features not going to come with 2.0 rather on Terminal 3.0.

They have begun working on scenarios – Settings UI and Command Palette, both under Priority “0” i.e most urgent. Apart from this, they also start working on features (enlisted below) with priority “1”- the next important ones.  Moreover, they release a list of milestones to be delivered in 4 weeks. 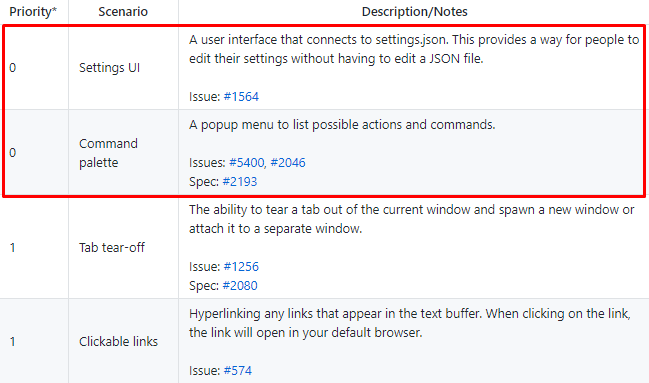 Note: There is speculation that the era of PowerShell will soon be over with Terminal achieving its final state. However, the company has not said anything related to this anywhere.

The Github publishes the Windows Terminal 2.0 roadmap that consists of an overview, Milestones, Issue Triage & Prioritization. Windows 10 users may access this by the end of 2021 spring. From now onward, each month we will get a preview and a final version for the Terminal.

Microsoft has laid down a list of features (scenarios) that are going to appear on Windows Terminal 2.0. Each of the scenarios come along with some priority grades ranging from 0 to 3, with “0” being the most urgent. Here is a list of key scenarios they’re aiming to deliver for Terminal 2.0.

In Windows Terminal 1.0, users can’t access the settings. Rather, they need to connect with settings.json so as to make any changes. Microsoft Team is currently working to create a user-friendly interface. This is why they put this under “0” priority. There is one issue in this scenario i.e. #1564.

This is basically a popup menu that comprises possible actions and commands.

Upon completion, this will allow users to move a tab out of the current window and attach it to some other window.

Hyperlinking any links that appear in the text buffer. When one clicks the link, that will redirect users to the default web browser.

The tech giant is hoping to make this the default command-line application. Whenever users try to run code with Terminal installed on their devices will present the Terminal 2.0 on the screen.

Upon completion, users may run one tab as Admin and another tab with some other user accounts.

Windows Terminal 1.0 does provide translucent and transparent features, however, they are not up to the mark. With Terminal 2.0, the company is going to have a transparent background without the acrylic blur.

Using this, one may be able to either pause output or scroll over the click.

Upon completion, the Terminal too will have an infinite scrollback including a history of “executed commands”.

The Quake mode will allow opening or terminating the Terminal window with the help of a hotkey. For example – To open Search UI, we use [Win+Q].

To see the full list of scenarios and the underlying issues, visit Github roadmap for Terminal 2.0.

The company has projected 4-week milestones by which they will engineer the Terminal 2.0 project. As soon as they complete new features, they will test them on Windows Terminal Preview first. These features will remain on the Preview for a month’s duration. If this works completely fine, they will move them into Windows Terminal.

Github presents a list of Windows Terminal 2.0 schedule updates. Furthermore, this includes the release builds of Windows Terminal along with the Windows Terminal Preview. The company has put a date against each milestone, however, these are subject to change. Besides, when the new releases come into effect, we will update the Blog post section –

That would be all for now!

How to customize Windows Terminal Preview in Windows 10