Microsoft has started working on Windows Terminal 1.0 way back in the year 2019 and has finally released the same. The new terminal has got several new features like – Tabs, Split Panes, Multiple Shell environments, etc. Windows 10 users may even change the background opacity, use different color schemes, key bindings, and others.

Windows Terminal 1.0 is, in reality, a super cool thing that features tones of useful things that were available on Mac and Linux for years. You may download Windows Terminal 1.0 visiting the Microsoft Store or get its source code from the Github. Let’s explore – 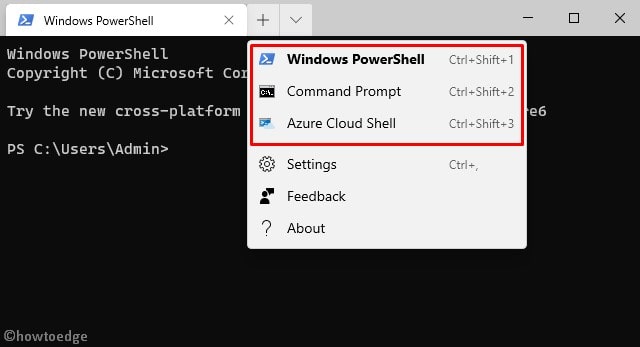 Read – How to Get Windows Terminal on Windows 10 PC

1. The concept of Tabs

Microsoft finally added a command-line environment that features the “use of tabs”. One can start a new tab using shortcut – “Ctrl+Shift+T” or hit the “+” icon on the top bar.

To close the current tab, you may press the “Ctrl+Shift+W” key combination. To switch in between the tabs, press “Ctrl+Tab” using the keyboard. With Windows Terminal 1.0, one can even re-order the tabs by just a simple – drag and drop.

When you start Windows Terminal 1.0 on your device, it lands into PowerShell. However, it does support different shell environments as well. Head over to the “down arrow” on the tab bar and you may launch Command Prompt, Microsoft Azure along with Windows PowerShell. In case, you have installed Windows Subsystem for Linux, you may open this as well.

Imp: Windows 10 users may now start SSH sessions too on the Windows Terminal 1.0.

We often feel the necessity of running more than one code simultaneously on Windows Console/PowerShell. Well, you can do this using Windows Terminal 1.0 too. In addition to the multiple tabs feature, this allows splitting the main screen into multiple shell environments. That’s a cool feature, isn’t it?

All you need is to keep pressing “Alt+Shift+D” and you will see the charm. See the snapshot below – 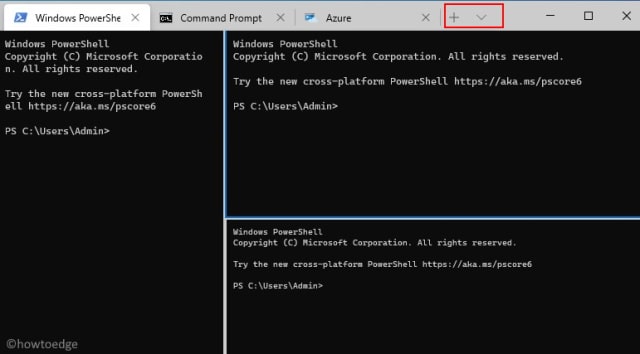 To switch in between them, use the mouse and click whichever screen you want to work with. Below, we have provided a few keyboard shortcuts that you may find interesting –

Windows Terminal 1.0 has included the better zooming feature as well. To zoom in or out, hold down the Ctrl key and start playing with the Mouse wheel. You will get a clearer picture of what’s ongoing on the Prompt Screen.

Keeping the Pane Screen size intact, this will enlarge/shrink the commands.

You may now either diminish or increase the background opacity on Windows Terminal 1.0. All you need is to hold down “Ctrl+Shift” keys and start rolling the Mouse wheel. The color of the background pane starts becoming opaque or translucent. To know more, see the Windows Acrylic style effect.

Note: If you remove focus from the screen, this resumes back its default background opacity. Clicking on any of the panes will restore the recent changes.

Windows Terminal 1.0 comes with numerous other customizations options. To reach out to them, click the “down arrow” available on the Tab bar and select Settings. Since this doesn’t open any user interface, you may open this using a notepad.

When the settings.json file opens up, you may custom change the following –

To know more, how to play with this file, visit the official Customize Settings page by Microsoft.

Or, read what you can add to the settings.json file. Microsoft has provided a guide as well to edit Windows Terminal settings.