Windows 10 Insider Preview Build 20206 is now available to download on the Dev Channel. With this build, Microsoft introduces Emoji Picker, Voice Typing support in 14 languages, and improved touch keyboard design. Insiders may now use the spacebar to drag the mouse cursor in any direction they want to.

With today’s build, the company enables insiders to use the spacebar to drag the mouse cursor in any direction they want to. Moreover, they are delivering a set of input features to Insiders meeting their expectations. Windows 10 Build 20206 now provides additional support for more emoji including kaomoji and symbols. Let’s explore the key features in detail –

With Windows 10 Insider Build 20206, Microsoft introduces new features and improves the existing ones. They are as follows –

The company introduces an emoji picker (evolving in nature) and support for more emoji. Moreover, they now support a few additional languages including kaomoji and symbols.

Microsoft will enhance the capabilities of emoji picker as time passes by. For now, this offers the following new experiences – 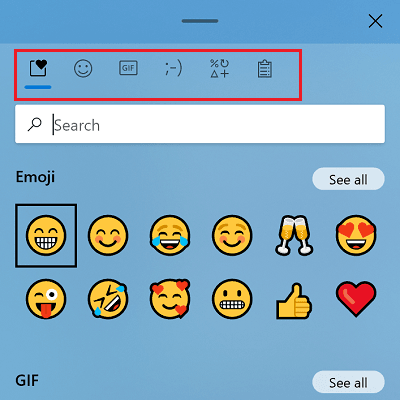 Microsoft introduces Voice Typing support on Insider Build 20206 Dev Channel. This is an improved version of Windows dictation that enables users to type effortlessly using their voice. We all have experienced this feature on our Smartphones. Now, it’s time to get cozy and comfy on Windows 10. The new Voice Typing includes –

Quick Note: To start voice typing on Windows 10, use the Win + H shortcut. Alternatively, one may also tap the microphone button to start typing.

As of now, this feature is available in the following languages –

Microsoft rolls in a new touch keyboard design for a few Windows Insiders. The improved design features a fresh aesthetic including several small tweaks such as key sizes, optimized layout, accuracy, etc. Here are the key changes in the updated design –

To do so, right-click or press and hold on the taskbar, then select “Show touch keyboard button” in the menu.

4] Use Spacebar to drag Mouse cursor

The company introduces new functionality to drag the mouse cursor using Spacebar on the touch keyboard. Users have desired the same for a long time and have provided feedback to this.

Just place a finger on the space bar and start sliding your other finger to whichever direction you want to drag the mouse cursor.

Changes and Improvements on Build 20206

Here are the key fixes on this Insider Build –

Here are the key issues that still require a fix –

To view the complete list of what build is in which Insider ring, head over to Flight Hub.