Windows 10 20H1 Build 18912 is out and brings some quality enhancements and fixes for PC. The Company introduces remarkable changes for the Narrator as well. In addition to these, Microsoft fixes the underlying issues on Chinese Pinyin and Japanese IMEs.

There are some minor issues as well that appear after installing this flight such as- Bopomofo IME, Realtek SD Card readers, anti-cheat and others. Let’s explore this Build in somewhat more detail- 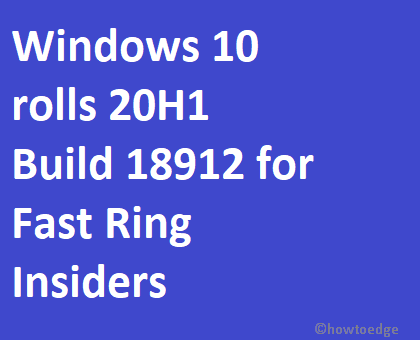 “Click me” link solution: Do you get frustrated tabbing through “Click me” links? The narrator can now tell you the title of the page that’s linked to—just press Caps + Ctrl + D, and Narrator will take the URL of the hyperlink you are on and send it to an online service that will provide the page title to Narrator. If you would like to disable all online service usage by Narrator, you can turn this off in Narrator Settings. If you find links that don’t give you a meaningful page title, please send us feedback. Thanks!

After installing 18912 builds, you won’t be able to switch back to either Slow or Release Preview Ring. This is because it doesn’t allow optional content like- enabling developer mode. As optional content is approved for particular rings, you must remain on Fast ring to add, install or enable such content.

How to Fix Immersive Search UI on Windows 10 20H1