On February 5, 2020, Microsoft rolls Windows 10 Build 19559 [20H2] for Insiders in the Fast Ring. This includes quality improvements for certain IMEs, resolves Green Screen of death error, and several others. Windows 10 insiders might now use File Explorer containing RAW, .heic, or .tif files without experiencing any lag.

Moving ahead, a few bugs do occur after applying this release like – “Error 0x8007042b”, “Error 0xc1900101“, etc. Apart from this, the BattlEye or WSL 4860 issues still persist even after installing Windows 10 Build 19559. Let’s explore the general fixes, enhancements, and known issues in detail. 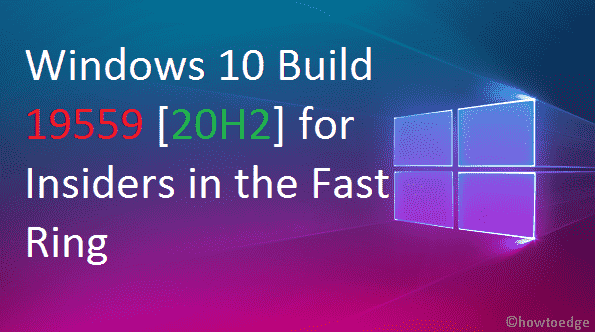 A few bugs still occur even after applying Build 19559 to your Windows 10 Device. They are as follows –

That’s it, we hope you get a clearer picture of what happens after applying this Build to your system.