With the first preview of 2020, Microsoft unfolds Windows 10 Build 19541 to the Insiders enrolled in the Fast Ring. As a part of the 20H2 development, it includes Task Manager improvements, updated notification area icon, and other system updates. Along with known issues, the specific update carries a small list of fixes, changes, and improvements.

According to the company, they worked on the Timers and Bing Instant Answers for Cortana users. The update of Windows 10 Build 19541 will be installed automatically. You can also get it by following the path Settings > Update & Security > Windows update. After that, move to the right pane and click on Check for updates. Alongside this, you need to check you have not either disabled or pause the automatic updates feature. 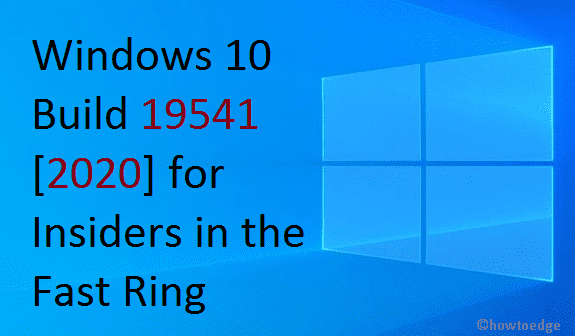 Here are the new features that appear starting with Build 19541 –

Windows 10 includes a new separate icon for Location inside the notification area. Users may now get to know which apps, in general, uses their specific location to provide news, feeds, and ads.

Windows 10 19541 will display the PC architecture of each process inside the Task Manager. All you require is to move to the Details tab and get the information. Just perform a right-click on any of item inside Task manager and select Architecture using the context menu.

Bing Instant Answers and Timers feature are now available online for Windows 10 users. As per developers, they are currently working on getting jokes (and other assistant conversations) back up and running.

At present, this attribute is available only in English (United States) and is most likely to support new languages soon as well. Just press the Cortana button and start speaking Hey Cortana or type the following into Cortana –

Here are the key issues that appear on this build –