Microsoft releases a new flight for Windows 10 21H1 Insiders in the Dev Channel i.e. Build 20180. This new build brings quite a few changes along with quality improvements and fixes. With this release, the company is allowing the new features that it forecasts in Build 20161.

After installing this build, users may encounter different types of issues while using Alt+Tab to switch between pinned sites on Microsoft Edge. As per Microsoft, the team is already working to resolve all the bugs that appear while using this shortcut and may bring an update to this soon. 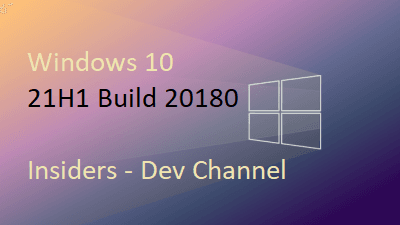 The company has already started the Build 20161 new features for almost all the users with the OS Build 20180. However, only a subset of insiders will enjoy the new pinned sites capability mentioned in the last week’s flight of Build 20175.

As per Microsoft, they will release Windows SDK matching to each new flight to the Dev Channel. So, better keep an eye at Flight hub to see the recent OS flights.

The I/O operation has been aborted because of either a thread exit or an application request.