Windows 10 version 2004, [20H1] Update Build event is currently live and will broadcast from 19th to 20th May 2020. You may go to the Microsoft Build page and view all sessions. Well, the team interacts with the developers and empowers them about future projects on the first day. Moreover, they talked about Azure, the future of tech, Power Platform for developers, and digital breakouts with Q&A on the 20th.

As we confirmed earlier, you will get your hands on Windows 10 2020 OS in between 26-28 May. Besides, the company publishes a page that depicts no known issues on Windows 10 20H1 and Windows Server, 2004 along with their rollout status. 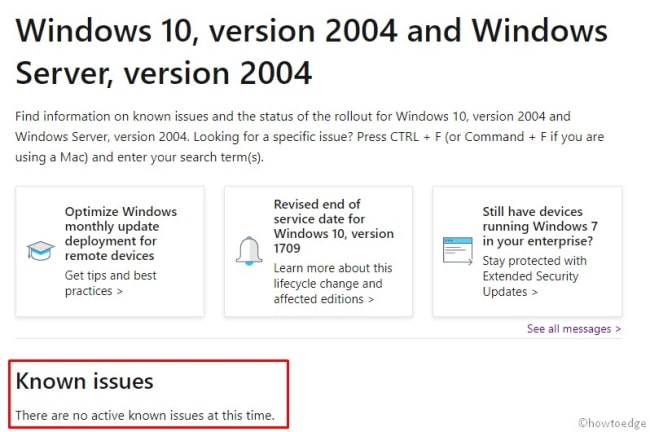 You may download and install Windows 10 2004 via the Windows Update section or get an ISO image visiting the Update Catalog starting from 27th May 2020.

Furthermore, Windows 10 20H1 is empowered with tonnes of modern features, fixes, and refinements. We have listed out a few of them –

Seeing the previous trends of Windows 10 OS Builds, there may appear a few bugs and errors as well. We guess that’s the reason why Microsoft added this page for the community.

Initially, before the launch of Windows 10 20H1, Microsoft claims of no known bugs on the featured update. However, recently they update a list of issues that you may avail of visiting the Windows Release Information.

How to Fix Immersive Search UI on Windows 10 20H1