Windows 10 19H1 comes out and carries lots of new features and enhancements. With the onset of May 2019 seventh feature update, System having storage less than 32 GB won’t be able to run either architect i.e. 32 bit or 4 bit. Hence, PC manufacturers must include at least 32 GB or more for the well functioning of the Windows 10 1903 update.

The above restriction applies to the PCs maker only. Furthermore, the devices which already have the capacity of fewer than 32 GB will continue receiving a 1903 update. Here, in this guide, we explain minimum system requirements on 19H1- 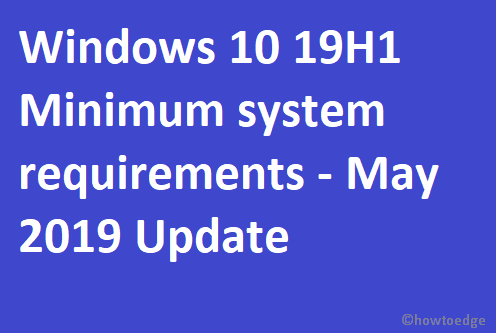 These are the system requirements to run 19H1 on a desktop, laptop, or tablet-

In addition to this, the company also updated its processor requirements for the 19H1. Though, it’s interesting to observe that Windows 10 still doesn’t officially support somewhat Intel, AMD, and Qualcomm processors.

This is the other time that Microsoft is updating the main hardware necessities for Windows 10. Earlier, the company raised the minimum necessities of memory to 2 GB for the 32-bit version with the Anniversary Update.

That would be all, I hope you now know the minimum system requirements to install Windows 10 19H1 on your computer.