Windows 10 21H1 will no longer come as a major feature update of the year 2021. Rather, this will be a minor update to already in-use Windows operating systems i.e. version 2004 or 2009. Microsoft has already announced that this will come in the form of a cumulative update and replaces the existing ones. In this post, we will discuss the minimum processor, hardware, and system requirements to download and install Windows 10 21H1 to your device.

As this is merely an extension to Windows 10 version 20H1 or 20H2, there are no changes in the required hardware and processor. Usually, there is speculation of an increase in storage while upgrading to a new version of Windows 10. Rest assured, as the storage requirements for Windows 10 21H1 remain the same as that of version 1903/1909/2004/2009 i.e. a minimum of 32 GB. 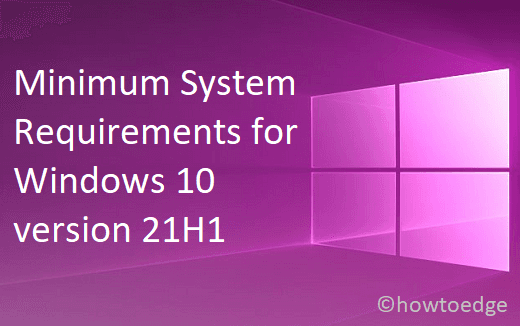 The company has even announced that there won’t be any changes in the required device drivers either. However, if you are on an older version of Windows 10, read this article in detail before proceeding to download the iso file of version 21H1.

Before going to download/install Windows 10 21H1 on your device, make sure that you meet the following system requirements –

Other Requirements for Windows 10 version 21H1

Apart from the above basic system requirements, your PC must meet the below standards as well –

Here, are the AMD supported versions for Windows 10 21H1 –

Qualcomm supported versions for Windows 10 21H1 are as follows –

Since the hardware configuration remains identical to that of Windows 10 version 20H2, there won’t be an issue installing the 21H1 feature update to such PCs. However, Microsoft might put a hold on releasing this update to the computers that bear some compatibility issues.