Microsoft has finally resumed the leftover work of Windows 10 19H2 and brings Build 18362.10000 on 1st July 2019. Windows 10 1909 is the next major release by the Company and will arrive probably at the end of September or early October. Though this update won’t be that release as we have expected, it does comprise enterprise characteristics, performance enhancements, and some other resolutions.

Owing to smaller in size, this may appear in one of the cumulative updates along with proper SSU. This implies users don’t require to perform a full re-installation rather just a patch-up. However, as this will be an interim update, you must update your existing OS with Windows 10 19H1 May update. The Company has even suggested updating your PC constantly as the upgrading process will remain the same for newer or older users. 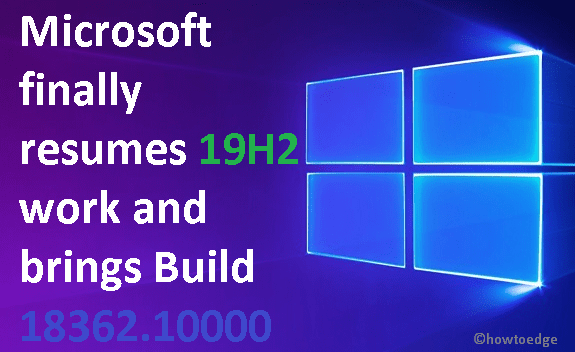 Note: Commercial customers will receive a 1909 update for at least 30 months whereas normal users a total of 18 months only.

As per the company entail, here are some of the key points to keep in mind-

Although Microsoft is planning to bring 19H2 to Insiders in the Slow ring using Servicing, they will separately publish the new flights. The upcoming blog posts will contain all the relevant information such as general improvements and fixes, known issues, etc.

The new Insider preview release comprises 2 behind-the-scenes changes that are designed for OEMs and not for Insiders. With this build, experts will test the existing servicing pipelines and their processes so as to deliver new updates directly to the customers. Whatever the new changes come for 1909 update, the same applies for May 2019 update as well.

At last, Microsoft urged Insiders to report any bug that they may encounter while updating their System using the Feedback Hub page.