April non-security updates for Windows 10 versions 21H2, 21H1, and 20H2 are now available. You may get this update automatically via Windows Update. If not, visit Microsoft Update Catalog and search for KB5011831. This is a non-security update and hence brings several new bug fixes, and improvements to your device. Installing this patch update will upgrade your Windows 10 PC to 1904x.1682.

The letter “x” in the above Build number ranges between 2-4 for 20H2, 21H1, and 21H2. This patch update will resolve the black screen issues that used to appear when you sign in or out of your computer. This also resolves an issue that prevents graphics processing unit (GPU) load balancing over Remote Desktop from working as intended. Get to know the whole list of improvements, and fixes in the below changelog. 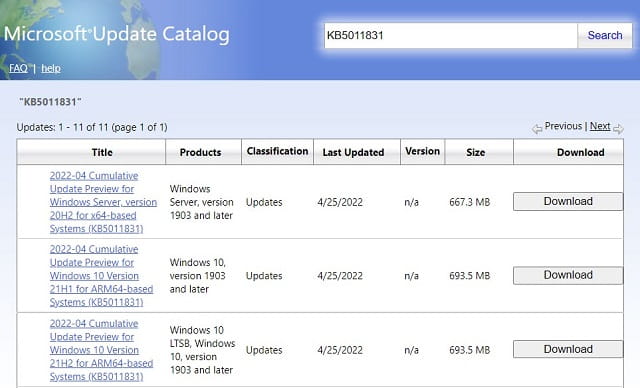 Other Bug Fixes and Improvements

There are a few other fixes as well. To know them, see the release note provided at the end of this post.

Before you proceed ahead to install KB5011831 on your Windows 10 PC, make sure to go through the list of known issues with this patch update. Only when you are comfortable with the known to occur issues, download and install this non-security update. Here’s a list of known issues on this cumulative update –

How to Get this Non-Security Update

As usual, there are two ways from which you may download this optional update and install it on your computer.