As an optional update, KB5009596 is more secure than the preview builds provided to Windows Insiders. Windows 10 users who are having issues with their installations and can’t wait for February’s Patch Tuesday update should install the optional update.

With this non-security update, you will have access to a new feature called “Sync your Settings”. The backup feature allows you to keep track of the apps you have installed on your Microsoft account, helping you to restore them if you migrate from Windows 10 to Windows 11 on the same device or another.

It is expected that Microsoft will roll out this new feature to everyone in the near future so migration to Windows 11 becomes easier. Microsoft also addresses a problem that might prevent PowerShell’s Get-TPM command from reporting Trusted Platform Module (TPM) information. It fails with an error showing “0x80090011 Microsoft.Tpm.Commands.TpmWmiException,Microsoft.Tpm.Commands.GetTpmCommand”.

Users now have the ability to manage their Microsoft Edge profiles using the News and Interests taskbar widget. The browser’s news & interests tab is where you can manage your Edge profile.

Microsoft has fixed one issue in the Windows 10 Build 19044.1503 update, in which the UI Automation feature was causing Outlook to crash on the desktop. The company has also corrected an issue with Windows Subsystem for Linux 2 (WSL2) that could prevent it from working properly when Fast Startup is enabled.

There have been two issues addressed over the last few months. Pen Haptics API is now available to all apps again after fixing a bug that prevented some apps from using it. Secondly, Issues reported by devices that are not Conditionally Access compliant have been fixed as well. The company has also resolved a problem that could cause printers to print incorrectly when using USB drives with Windows 10 version 2004 or later. In Microsoft Edge, some surround sound is now working properly, especially when viewing platforms like Netflix.

This update addresses an issue that can occur when using Advanced Video Coding (AVC) software encoding on Remote Desktop. Also, there is a deadlock in vpnike.dll and rasmans.dll that developers are currently working on.

Microsoft has added a new option that will remind you about the upcoming retirement of Internet Explorer 11. Last but not least, the company has resolved an issue causing Windows to no longer work and generates the error, “IRQL_NOT_LESS_OR_EQUAL”.

This optional release can be installed either through Windows Update or through the Microsoft Update Catalog.

If you’re going to download the KB5009596 non-security update using the Windows Update, you can use the below steps:

This will download and install the update automatically. When it has finished downloading, restart your computer to complete the installation.

If Windows Update does not work, you can always use the Microsoft Update Catalog. Here are the steps: 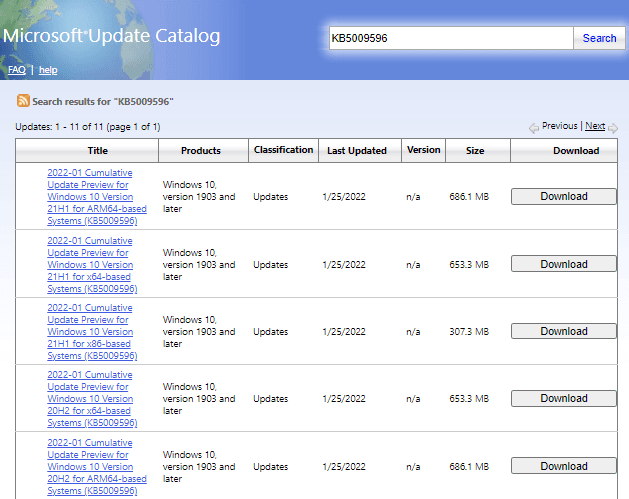 You can use Chrome or another browser to download the offline installer by copying the .msu link and opening it in a new tab. For Edge users, you don’t need to do more than tap a single time to download the package.