Sept 2021 cumulative update “KB5005565” is now available for Windows 10 versions 2004, 20H2, and 21H1. This is a minor patch featuring security updates for Windows components, Microsoft services, and a few others. Apart from this, it also fixes the “infinite number of child directories” issue through PowerShell.

Installing KB5005565 will increase the existing OS Build update number to 1904x.1237. The letter “x” varies from 1 to 3 depending upon which version is currently running on your computer. The list includes 1004, 20H2, and 21H1. Let’s have a quick look at the fixes and improvements that will appear after installing this cumulative update. 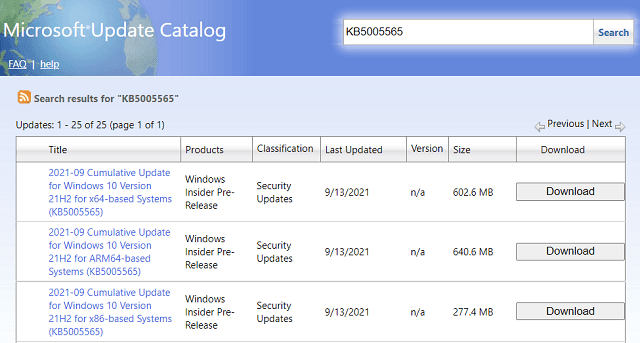 Apart from improving the security aspects of all Windows components and Microsoft services, this also brings the following changes.

How to get this Patch Update

By default, the operating system receives the new security/non-security patches via the Windows update section. This will happen for the KB5005565 cumulative update as well unless you have set your PC as a metered connection.

Allow downloading updates over any network, navigate to the path below, and hit Check for updates –

Microsoft uploads the standalone packages of each one of its cumulative updates at Update Catalog. To download and install KB5005565, do the following –

Known Issues on this Build Update

Before you install this patch update on your computer, make sure to read all the issues that may occur after installing it. The list of all known issues on Windows 10 21h1, 20h2, and 2004 are as follows –