For those who do not receive the updates in time, you can manually download and install the updates using Microsoft Update Catalog or Windows Server Update Services (WSUS).

This security release comes with a quality update, and the key changes include:

The following quality improvements have been included in this security update:

You will only receive and install the new fixes included in this update if you have installed prior updates.

Based on the information, we currently have the following issues –

Microsoft is working on a resolution and they will fix it in the upcoming release.

Slipstream SSU into the custom offline media or ISO image before slippingstreaming the security update. Extract the SSU using the following steps:

Microsoft is working on a resolution and they will fix it in the upcoming release.

If you install this update, the API OpenEncryptedFileRaw(A/W) for the Elastic File System (EFS) won’t work when you back up to.

Use the following steps to download the KB5005033 security update –

If the automatic search doesn’t receive any pending update, you can download the security patch manually through the Microsoft Update Catalog. Here’s how to do this – 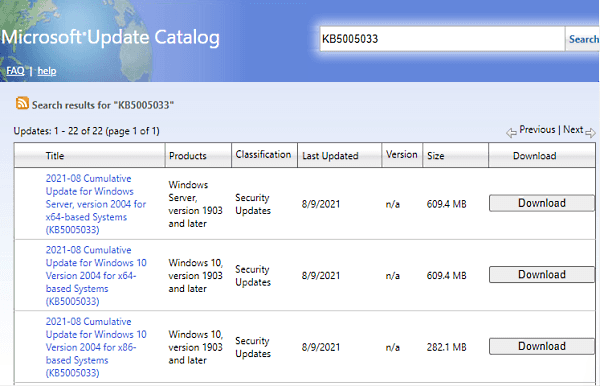 These are the configuration to get the update with WSUS –