Microsoft has released a new cumulative update KB5004946 to fix the “PrintNightmare” vulnerability on Windows 10 1909 and 1903. The update is rolled out as a security update increases the OS Build to 18363.1646. It’s not everybody getting it to the same time, but it started rolling out on July 5th. So if you go to Windows update, or if your computer tells you there’s an update, it is a mandatory update because it has to do with security and it’s very important to apply.

Here the company has worked on a remote code execution exploit in the Windows Print Spooler service, called “PrintNightmare”, identified as CVE-2021-34527. It has been released for every version of Windows 10 no matter which version you are on right now. 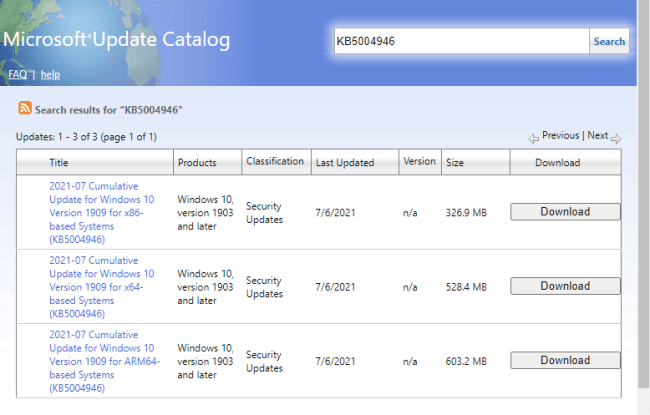 This problem was found in The Print Spooler that means attackers can take control of a computer in a network through that platform. However, it affects mainly those people who have printers and are networked. Therefore, if you have a Wi-Fi printer that you use to print through different devices then you are more at risk.

The cumulative update KB5004946 doesn’t fix the issue completely, but it prevents anyone from doing it over the Internet or over a network. In order to overcome this flaw, the company has recommended two methods that include disabling the service for a while and the second approach is to block incoming connections to a print server through Group Policy Object.

I would guess that maybe by next week as we go to Patch Tuesday, you will get a complete resolution for this problem. The update is very important especially if you use printers, so make sure to grab it quickly.

To download and install KB5004946 security update, you can use three different methods, but before this, make sure to install the SSU update KB5001406 or the latest SSU KB5003974 on your computer.

Use the following steps to download KB5004946 security update –

The next method is to download the security patch manually through the Microsoft Update Catalog. Here’s how to do this –