On Tuesday Patch day, Microsoft has released a new cumulative update KB5004245 for devices running Windows 10 1909. This update is rolled out as a security update increases the OS Build to 18363.1679. It updates for verifying usernames and passwords to improve security for the basic operations performed by Windows. The company has worked on multiple updates like Windows Virtualization, Windows Linux, the Windows Kernel, the Windows MSHTML Platform, Windows Graphics, and others. 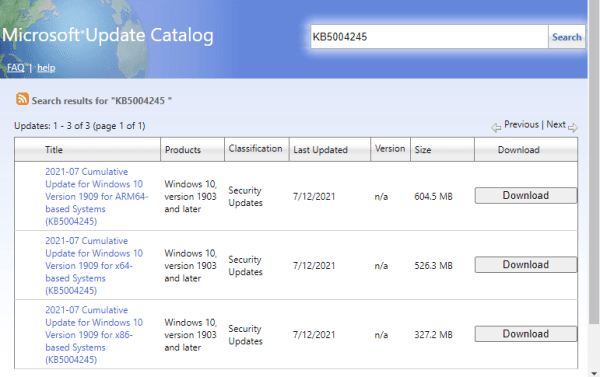 It’s not everybody getting it to the same time, but it started rolling out on July 13th. So if you go to Windows update, or if your computer tells you there’s an update, it is a mandatory update because it has to do with security and it’s very important to apply.

As soon as we come to know the changes and known issues in this update, we will provide it immediately, but still, there is not a single issue that has been encountered with the cumulative update KB5004946.

There are three different methods you can use to download and install the KB5004245 security update, but before this, you must install the SSU update KB5001406 or the latest SSU KB5004748 on your device.

Use the following steps to download the KB5004245 security update –

The next method is to download the security patch manually through the Microsoft Update Catalog. Here’s how to do this –