On Tuesday Patch day, Microsoft has released a new cumulative update KB5003635 that brings quality improvements and fixes for devices running Windows 10 1909. The update is rolled out as a security update increases the OS Build to 18363.1621. It improves different Windows services and updates security for the basic operations performed by Windows. The company has worked on some other updates like Windows OLE (compound documents) security, for verifying usernames and passwords, for storing and managing files, including some input devices like mouse, keyboard, or pen. 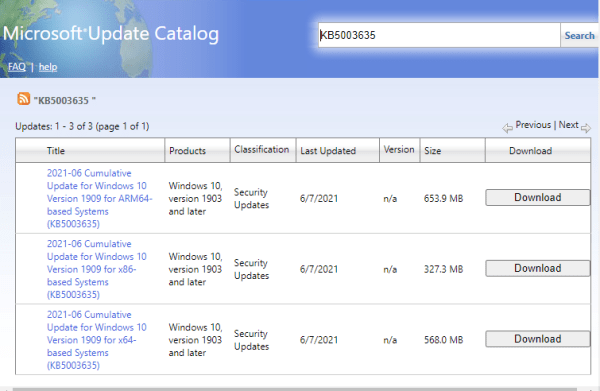 This security update comes with the following improvements and fixes –

No known issue has been yet reported with this update.

To download KB5003635 security update, you can use three different methods. But before you download this update, you must install the SSU update KB5001406 or the latest SSU KB5003710 on your computer.

Use the following steps to download KB5003635 security update –

If the automatic search doesn’t receive any pending update, you can download the security patch manually through the Microsoft Update Catalog. Here’s how to do this –