March 2021 Security patch for Windows 10 version 1909 is out is now available at the Windows Update section. With the cumulative update, KB5000808,  Microsoft improves the security of all Windows 10 components, basic services, and the Edge browser.

Additionally, the developers have also released an update directly to the Windows Update client so as to improve its reliability. From now onward, before offering any new update, they will check if your device is compatible or not. If all found OK, the update gets automatically downloaded and installed on your PC. Kindly note that the new setting doesn’t apply to long-term servicing editions. Let’s explore the key changes in detail – 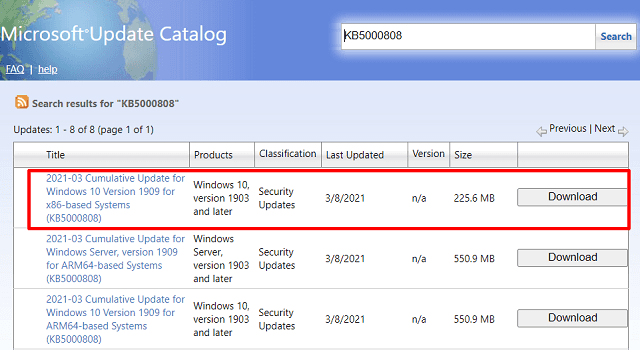 If the Windows Update client is not working properly, you may improve its reliability by downloading and installing an update from Microsoft.

No new bugs appear after applying this security patch.

How to Get this Patch Update

Before proceeding to download/install the latest cumulative update i.e. KB5000808 on your device, make sure to first apply the recent SSU. Doing so will ensure the update process completes without getting into any new bugs or errors. The latest servicing stack update for Windows 10 1909 users is KB5000908.

The update gets automatically downloaded and installed on your device. When the installation finishes, there appears a prompt asking to restart your PC. In case of not receiving any new updates, you may perform this task manually as well.

You don’t require to do anything except keep your system in sync with the WSUS. Also, make sure that you have configured Products and Classifications as follows –