March 2021 Security patch for Windows 10 version 1607 is now available for download at Windows update. Before applying the KB5000803 cumulative update, make sure to first download and install the recent servicng stack i.e. KB5001078. Ensuring this will make your PC compatible with the latest security patch and also the update process completes without getting into any error.

You may get this security patch either via Windows Update, Update Catalog, or through WSUS. Let’s explore the key highlights of Build 14393.4283 – 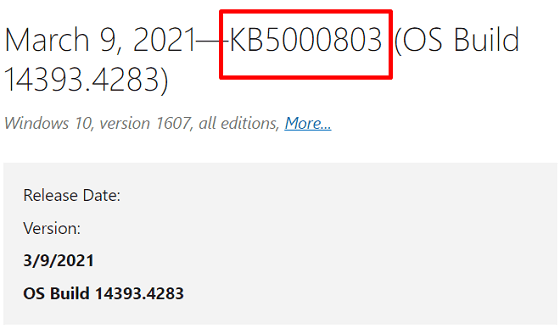 In this, the RootShareAcquireSuccessEvent field has the following possible values –

Note: If this key doesn’t exist prior to installing this build update, it will be created automatically. To make any changes to the dfslog/RootShareAcquireSuccessEvent inside the registry, you must restart the DFSN service.

No new bugs appear on Windows 10 version 1607 after applying this update. However, the error – “2245 (NERR_PasswordTooShort” still occurs if you have configured the “Minimum Password Length” group policy to use 14 or more characters.

Before applying this cumulative update, make sure to first download and install the recent servicing stack update i.e. KB5001078 on your device.