Microsoft rolls a new cumulative update i.e. KB4598291 for Windows 10 20H2 insiders in the beta as well as the release preview builds. This new patch will upgrade the existing OS build number to 19042.782 with quality changes and improvements. As of now, users will get the cab updates which they can easily extract and install on their computers. 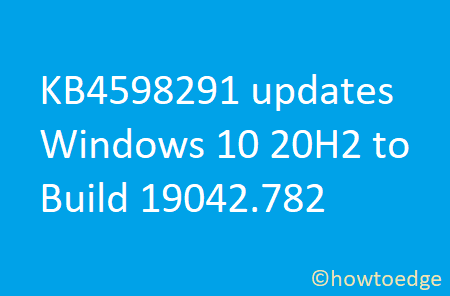 These values will remain as they are with not any further modifications.

BSOD and Other Issues

Besides the above fixes and improvements, Microsoft performs the following changes to Windows 10 version 20H2 –

First of all, click over the below link to download the cab file matching your system configuration.

When the download completes, read how to install cab updates on Windows 10 PC.