Windows 10 receives a new cumulative update KB4586839 for devices running Windows 10 1809. This is a non-security update patch brings some improvements and fixes to the device along with the OS Build 17763.1613. It includes a list of fixes and changes that addresses some quality improvements when using Microsoft Office products and some Windows basic operations.

You can see the complete list of the latest cumulative updates if you are on some other version of Windows 10. 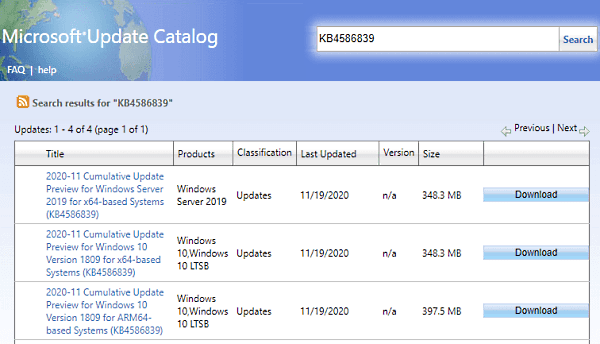 This is a non-security update that includes some quality improvements. Key changes include –

Known issues in this update are:

Some users encountered the error, “0x800f0982 – PSFX_E_MATCHING_COMPONENT_NOT_FOUND.”, after installing KB4493509, devices with some Asian language packs.

You can do the following to fix this issue:

Note If reinstalling the language pack does not solve the issue, then reset your PC as follows:

You will receive a notification regarding this KB4586839 update via Windows Update. If not, you may try either of the following ways –