In the last month, there was an announcement to replace the Classic Edge (EdgeHTML version) with its new Microsoft Edge browser through a new cumulative update. According to the sources, Microsoft is now doing exactly the same as what had been stated.

Microsoft is rolling out two new mandatory Windows 10 Cumulative Updates KB4576753 and KB4576754 that will install the new browser Windows 10 to replace the old version. According to the reports, this update has been made as a one-way process that means once you grab the update, there is no mode to revert to the previous update. 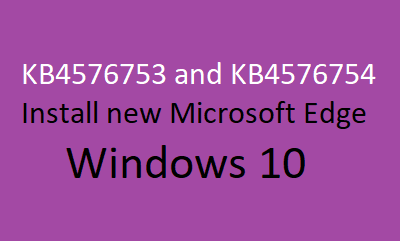 After installing this update, here are some key features that will be included:

Microsoft is currently not aware of any issues with this update.