On the July patch Tuesday, Microsoft releases a new cumulative update for Windows 10 series 1900 – KB4565483. This is basically a security update that increases the build version of Windows 10 1903 to 18362.959 and 1909 to 18363.959. With this patch, the company deals with the Browser Helper Objects in Microsoft Edge and brings security improvements for IE, Microsoft Store, Office Products, and others. Apart from the update changes, the developer team also identifies a known issue that might be get settled in the next updates.

You can either download the KB4565483 update manually or let Windows do it for you. The manual installation is another option you can use if your patch gets failed or stuck. To get it, open the Windows Settings (Win+I) > Update & Security > Windows Update. Then, move to the right pane and select Check for updates. In order to check the complete list of the patch, open Windows 10 Cumulative Updates. 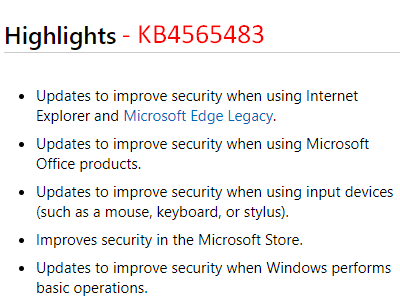 This update includes a single issue –

Issue – After installing cumulative update KB4565483 on your Windows 10 device, you may possibly find some troublesome while connecting to the wireless wide area network over the LTE modem. Though, the Network Connectivity Status Indicator (NCSI) in the notification area might still show that you are connected to the internet.

Solution – As it turns out, Microsoft specialists are working on a resolution and may provide it in an upcoming release.

To get this security patch, go through any of the below channels –