June Patch Tuesday is here and Microsoft pushed out a new cumulative update KB4561621 for Windows 10 version 1803. With this security update, the version number of Windows 10 1803 is increased to Build 17134.1550. The company has worked on the improvement of security for the input devices, Windows basic operations, and more. Apart from the changes, the team also worked on the problem that stops users from updating .msi files from a network folder.

You are able to download KB4561621 as a .msu file format from the Microsoft update catalog site. It is always recommended to upgrade the system to the latest version so that it can be more protected from malicious software. To do that, open Settings > Update & Security > Windows Update > Check for updates. In order to access the complete patch list, visit Windows 10 Cumulative Updates. 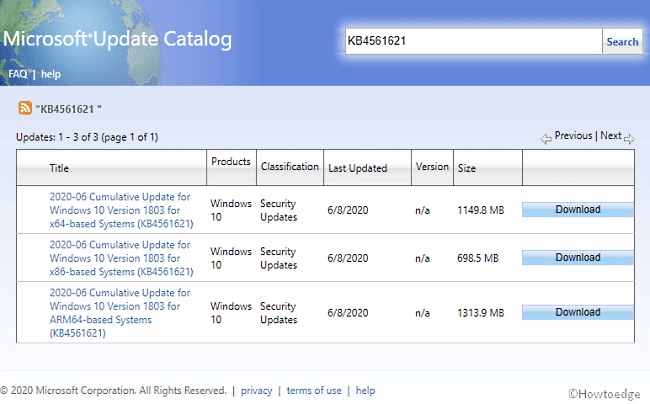 General Fixes and Improvements on KB4561621

The Key changelog is as follows –

As of now, the company is not aware of any known issues.

You will auto receive the new patch update KB4561621 on your respective Windows 10 version 1803 through Windows Update. Additionally, you may download the patch update manually as well by visiting the following address –

After that, click on the Check for Updates button.

If you configure Products and Classifications as described below, KB4561621 will auto-synchronize with WSUS.