Microsoft releases a new non-security cumulative update for Windows 10 series 1900 – KB4554364. This patch update enhances the build version of Windows 10 1903 to 18362.753 and 1909 to 18363.753. Earlier, VPN users face difficulty while connecting to the internet on their devices. They either receive limited or no net connectivity signals at Taskbar’s notification area. After applying this cumulative update, you won’t get such errors on apps that use WinHTTP or WinINet.

Usually, one receives a notification automatically on their Screen regarding new releases through Windows Update. However, the same is not applicable to the KB4554364 patch. Hence, we suggest users visiting Microsoft Update Catalog, type in the KB number, select your system architecture, and download the respective .msu file. 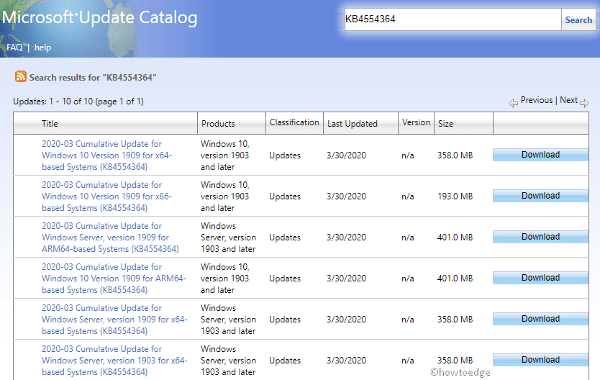 As per Microsoft, they are not aware of any known bugs on this release.

Note: Make sure to first download and apply the recent SSU i.e. KB4541338 before downloading this KB4554364 cumulative update. There is only one channel from where you can get this Tuesday patch.

Note: Unlike previously, you won’t receive any notification automatically through Windows Update. Neither you can download visiting Windows Server Update Services (WSUS). See the Microsoft Update Catalog for instructions.