Windows 10 version 1703 reaches the end of services for all Editions after receiving the cumulative update – KB4550939. Microsoft recommends you to upgrade the existing OS to the latest version of Windows 10 so as to continue getting the security and quality patches. This Tuesday patch updates the Windows 10 1703 to Build 15063.2346.

KB4550939 includes quality improvements for certain applications like Windows Kernel, Microsoft Graphics Component, Windows Media, and others. The company also works on the issue that causes a memory leak in the LsaIso.exe process. In order to get the latest patch list, visit Windows 10 cumulative Catalog. 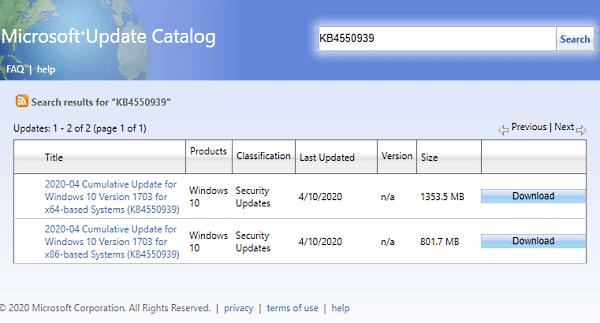 The key changes on this cumulative update are as follows –

With this Tuesday patch update, the devices on a domain might not be able to install apps published using a Group Policy Object. Also, this problem only affects app installations that use .msi files. However, it does not affect any other installation methods, like – from the Microsoft Store.

In order to reduce this issue, you need to manually install the app on the device. Microsoft is working on a resolution. They will provide an update in an upcoming release.

At first, download and apply the latest servicing stack i.e. KB4550992 on your PC so as to make the upgrade process smooth and effective. There are currently three different ways to update your Windows 10 v 1703 to the latest cumulative update. These are –