Microsoft releases the first cumulative update of this month (Feb) for Windows 10 1607 that enhances its build number to 14393.3504. KB4537764 is basically a security patch, hence it upgrades almost all Windows components and services including Internet Explorer.

Apart from the quality fixes and improvements, there are no new bugs that we are aware of in KB4537764. The two known issues that were re-occurring after each cumulative updates, appears here as well. The team is currently exploring resolutions that can resolve these errors. In the meantime, enhance your Windows 10 version 1607 so as to comply with the latest security norms. To see the complete list of Feb’s patches for different OS versions, browse to Windows 10 Cumulative Updates. 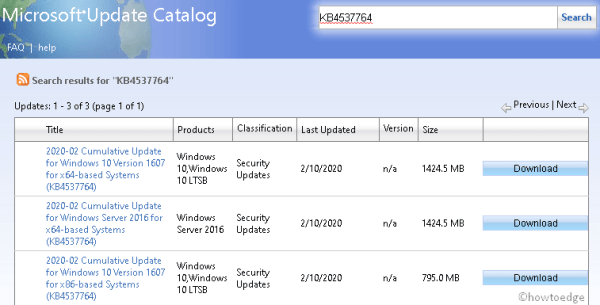 The two issues that were popping after each cumulative update remain exactly the same in this build as well. They are –

To upgrade your Windows 10 1607 device to Build 14393.3504, use any of the below 3 release channels. However, you need to first install the servicing stack i.e. KB4520724 so as to make the upgrading process smooth and effective.

You will get a notification regarding the KB4537764 patch. If not, you may manually download this navigating to –

Alternatively, you may download the standalone package itself browsing to the official webpage.

The KB4537764 cumulative update will automatically sync with WSUS if you configure Products and Classifications as follows: