KB4534321 solves issues related to apps like – searchindexer.exe, ctfmon.exe, ntdsutil.exe and  netdom.exe. Similarly, KB4534308 addresses the error 0xc0000005 (STATUS_ACCESS_VIOLATION) and issues related to ctfmon.exe, netdom.exe, etc. Users may manually download the 23 Jan 2020 patch visiting the Windows Update under Settings or let Windows do it for them. To view the complete list of recent builds, open Windows 10 Cumulative Updates. 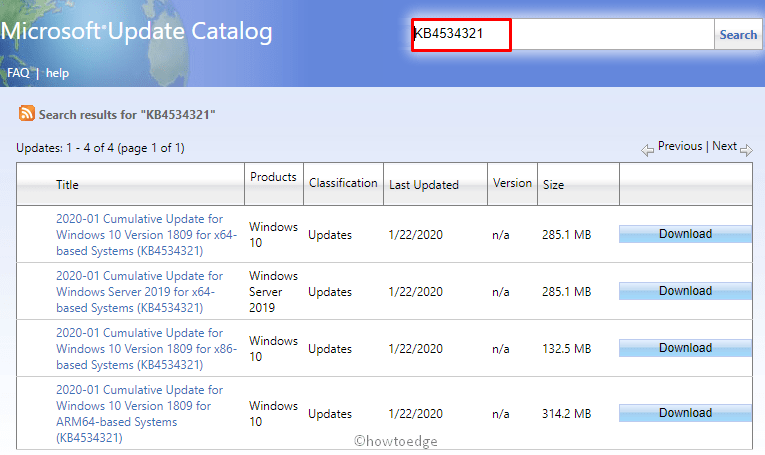 In addition to the above enhancements, KB4534321 resolves issues related to searchindexer.exe, ctfmon.exe, ntdsutil.exe, and netdom.exe. Moreover, it addresses the “0xc0000005 (STATUS_ACCESS_VIOLATION)” error, and handle leak inside the EnableTraceEx2() function.

There are a few bugs that may occur after installing the recent patches on your device. They are as follows –

Note: Microsoft is currently working on a resolution and may provide the same in an upcoming release.

Before proceeding further, make sure to install the following Servicing stack updates on your PC –

You will auto receive the new patch update KB4534321 and KB4534308 on your respective Windows 10 1800 series PCs through Windows Update. Moreover, you may manually download these cumulative updates as well navigating to the following address –

If you configure Products and Classifications as described below, KB4534321 and KB4534308 will auto-synchronize with WSUS.