Microsoft rolls cumulative update KB4516077 for Windows 10 1809 users which takes the existing OS to build 17763.774. This patch consists of several new fixes and enhancements specifically for devices running the October 2018 Update. As per the experts, they resolved the File Explorer sudden crashing bug, the background image, and so on. The best thing about Build 17763.774 is that it comes just a single day after the launch of the security updates.

The Company introduces fixes for several other issues related to Display, Office 10, EVDs, App-V applications, etc. Bitlocker and Windows Defender retrieve some major advancements on KB4516077. With this cumulative update, the team introduces temporary solutions to some of the pre-existing troubles as well. 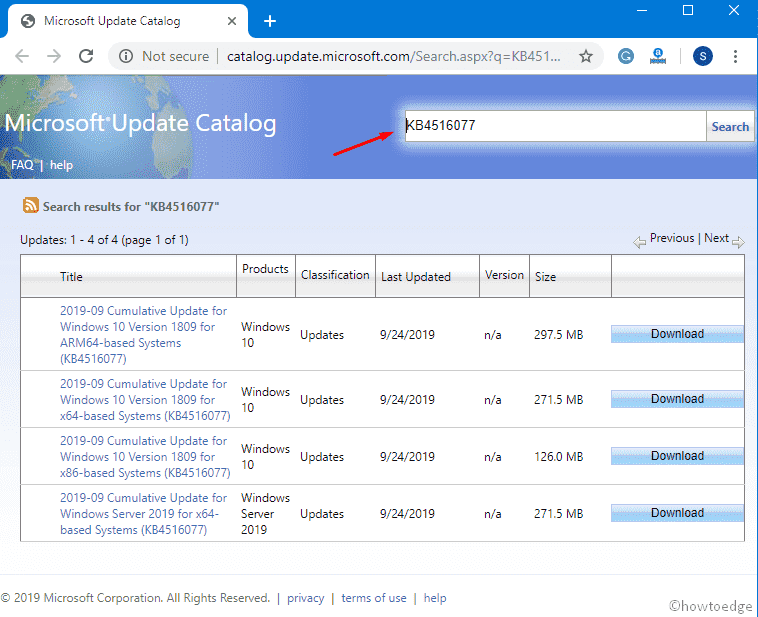 General Fixes and Improvements on KB4516077

Here, we discuss the key changes and improvements that came along with KB4516077 cumulative update-

KB4516077 non-security patch update comprises the same bugs as there were in KB4522015. You may check out them in this post of our site.

How to get this cumulative Update

We suggest you execute the current SSU on your PC before downloading this security patch KB4516077. The latest servicing stack for this patch is KB4512577.

Windows Update section will notify you about this cumulative update through a message in the notification panel. You may download the standalone package manually through the Update Catalog.

Alternatively, navigate to the following address and hit Check for Updates button.