KB4476976 cumulative update has been rolled out by Microsoft on 22 Jan 2019. This Tuesday path will now upgrade Windows 1809 to Build 17763.292. This update is supposed to fix a slew of known issues on the current version of the operating system. This release has introduced some quality improvements. However, there are no new features related to the OS are being brought in this update.

KB4476976 now jumps to the Build 17763.292. This Build will fix different known problems as Microsoft Edge stuck on a few video drivers, Audio playback and Compatibility of AMD processors. The networking issue, Remote Desktop and File Explorer issues are likely to end with this update. 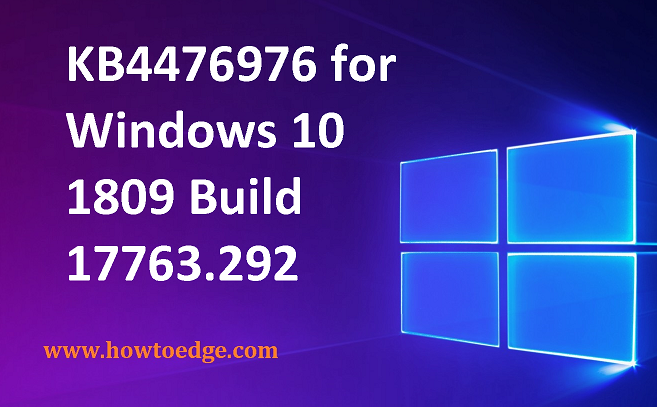 Read this carefully before installing the update –

You have to apply the latest SSU on your computer before going for the installation of the LCU. LCU stands for the latest cumulative update whereas SSU for Servicing Stack update. SSUs are basically there to improve the reliability of the LCUs update so that everything goes as planned by Microsoft in addition to applying the security fixes. To get more information, see Servicing stack updates.

To get more details about the Stand-alone package of the current SSU as per your LCU, have a look at the Microsoft Update Catalog.

This update will be available on your system soon. However, if you wish, you can force download this update. The procedure is plain and quite simple. Just follow these steps:

At first, navigate to the following path to download and install the knowledge base for your system.

If you are using Windows Update, the latest SSU (KB4470788) will be offered to you automatically. To get the stand-alone package for the latest SSU, go to the Microsoft Update Catalog.

You can click on the direct link below to download this file as per your system architect.