Xbox is quite a useful and impressive application that allows you to record clips of video games and to stream console games. But some users recently encountered an Xbox game bar 0x8232300f on the Status bar of the computer while recording gameplay. This error typically occurs because of the false configuration of the Xbox app and the damaged Microsoft app cache. Because of this issue, users fail to record clips of Xbox video games.

This tutorial will show you some effective ways that will help you to fix this issue. 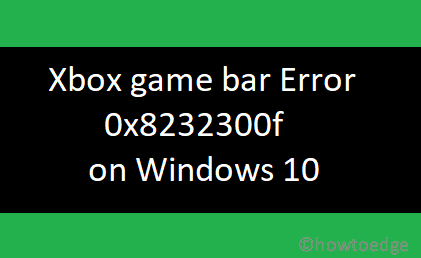 Many users reported that they got able to fix this error just by repairing the Xbox Game Bar. Here is how you can do this:

Note: If you don’t find the feature in the Optional list, then do the following steps:

Sometimes pending updates also cause to occur the problems related to the Xbox game bar. To fix such an issue, you can check your pending Windows updates and install them if available. Here are the steps you can use to do this:

Unfortunately, if none of the above methods worked then try re-installing the Xbox app. This will make a new copy of the software with no bugs and issues. Follow the steps to do so:

Fix: Xbox One Error 0x80a40014, Your Microsoft Account has been locked