In this guide, we will cover why an error 0x8007013d appears while installing a game, upgrading it, or opening it on Xbox One console or even Windows PC. Apart from the most probable causes, we will also look into four ways that might help to overcome this issue on your gaming console.

Upon encountering this issue on your Xbox console, you may receive an error message as well that reads the following –

"Something went wrong. Give it another try. ……" 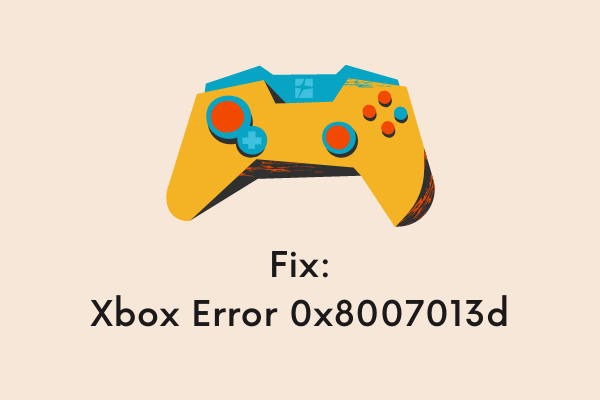 In general, users may encounter this issue when their devices meet one or more of the following conditions –

If you are getting an error 0x8007013d while starting the Xbox console or playing games on it, attempt these fixes to resolve this issue.

The Xbox errors mostly appear when there is a server outage or any service down worldwide. It is quite easy to check whether any service is down or not by visiting the Xbox status page.

When you visit the Xbox support page, expand all services one by one and check if any internal service is not up or not running. If any service is indeed not running, you will find a notification beside it. Wait for that particular service to be up and running and only then, try again to play any game on the Xbox One console.

Learn how to fix Xbox One is Stuck on Black Screen

The error 0x8007013d often appears because of internal glitches on the Xbox console. So, it is required of you to shut down and reboot your gaming console or the device (where you are trying to play the game).

Here’s how to reset Xbox One console –

To reset Xbox on Windows PC, do the following –

If you are facing this issue on your Windows PC, reboot your device. In case your device appears to be frozen, press and hold the Power key and wait for 10 seconds until your PC turns off. Wait for the next 30 seconds, and hit the Power key again to restart your computer.

Any issues with the Mac address might also trigger an error code 0x8007013d on your Xbox One console or Windows PC. You are never sure whether this indeed is the case or not. To confirm it, consider changing the Mac address for once. Here’s how you may perform this task –

At times, the error 0x8007013d is subject to a particular game only and this appears only when you install or try playing that specific one or two games. If that’s the case, you should uninstall that game and see if the error resolves.

Here’s how to uninstall a game on Xbox console –

I hope this article indeed helps to overcome the Error 0x8007013d on your Xbox One Console or Windows 11/10 PC.