Despite of addressing the old issues, the KB4571756 cumulative update is causing new bugs and errors on Windows 10 v2004. Several users receive messages – “Element not Found” or “process exited with code 424967295” when they try to start Windows Subsystem Linux (WSL2) on their PCs.

A few of them even reported that their Operating system starts running slow after applying the KB4571756 patch. Though this is a security update featuring new fixes and improvements; seeing so may issues we don’t recommend applying this cumulative update. However, if you have already installed this and are running into any trouble, read this guide to know ways fixing “WSL2 Element not found” error. 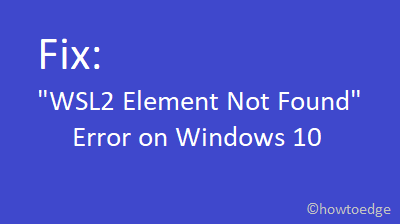 To fix the “Element Not Found” error while opening WSL2 in Windows 10, use these workarounds –

Just after releasing the KB4571756 patch, Microsoft rolls another compatibility update for Windows 10 v2004 i.e. KB4579305. The exact purpose of this cumulative update is still not clear. However, there is speculation that it might fix system apps causing compatibility issues on Windows 10 20H1.

Users have already reported about this bug under the Feedback Hub, however, Microsoft hasn’t acknowledged this issue officially.

Since the error starts after installing the latest cumulative update i.e. KB4571756, removing this security-patch should fix the issue. There are two ways by which you may remove the recently installed cumulative update. They are as follows –

Follow whichever method suits you the most. However, do make sure to halt the auto-upgradation to the latest cumulative updates till Microsoft announces a fix. Otherwise, you will again experience the same trouble on your computer. If you have any queries or suggestions, let us know in the below comment section.

Fix: Right-click not working on Start Menu or Taskbar