On Windows 10, Action Center carries Quick Actions which is a set of which lets you open things or switch settings on or off conveniently. Previously, you were able to operate these buttons from the Settings app. However, beginning with version 1903, you can include, exclude, and replace these buttons within the Action Center. In this blog post, you’ll learn the easy approaches to edit quick action toggle on Windows 10 version 1903.

With the Quick Action buttons, you could control settings like Wifi, Location, Brightness and many more options quickly. Thus, now there is no necessity to launch the main Settings app itself with 19H1. Along with a new brightness slider, the company has made it convenient to customize the quick toggles in the Action Centre. 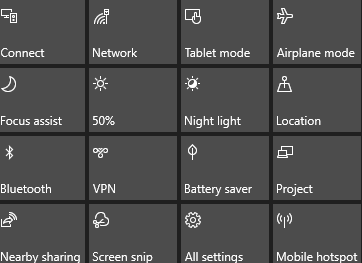 Note– If you’re unable to manage the given procedure, it’s possible as you might not running the version of Windows 10 that changes the behavior of the Action Center. You will get the ability to manage the buttons starting with 19H1 and later.

To edit quick action toggle in the Action Center, use these steps-

Step-2: Click on the System category and let open the new page.

Step-3: In the left panel, scroll down to Notifications & actions and the go-ahead to the right side.

Step-5: Here, on the new page, you can disable and enable the application which you use frequently using the toggle button.

Step-6: You can also change the position of the app by dragging where you want.

When you complete the above steps, the Action Center will display the Quick Actions buttons on the rearranged place that you made.