Recently, Microsoft proclaimed Windows 10 version 1903 Update which is now available for each one of its users. Although the release gets a little bit delay (a month) to May against April 2019, yet needs serious fixes and improvements. Today, in this blog post, we cover all known issues that arise after installing Windows 10 1903 May 2019 Update.

There are commonly 12 known issues that prevail on this Windows 10 may 2019 update. Three of them are listed as under investigation phase while the remaining nine effects belong to the mitigation phase. Yet, not a single issue is officially listed as solved. Microsoft experts have ensured that they will release a patch update to address issues upon which they are currently working. 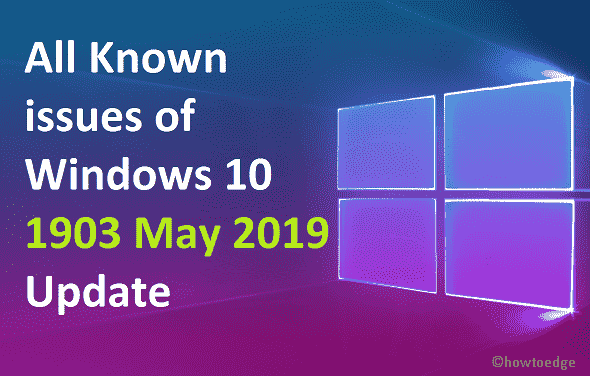 Here are the detailed descriptions of the Known issues that come with Windows 10 May 2019. Microsoft Team is either investigating or mitigating these bugs.

1. Display brightness may not respond to adjustments

Microsoft and Intel Corporation has confirmed that there is a driver compatibility issue in some of the Intel devices. As per techies, display brightness settings may appear but it won’t change after upgrading to Windows 10 may 2019 update. Hence, it would be better to block the update process for some time until this bug persists.

The possible workaround to solve this trouble is – Restart the PC and try to change the brightness again.

2. Duplicate folders and documents showing in the user profile directory

After installing a 19H1 update, you may see a few extra folders like Desktop, Documents, and Pictures exhibiting the same name. The copy images of folders appear out of nowhere and redirect to some unknown folder. Generally, this bug arises when you create back up using a One-Drive Wizard or Windows Out-of-Box-Experience (OOBE). You may also tackle the same trouble while opening the properties section of a folder manually on File Explorer.

Microsoft has not addressed this duplicate folder issue, yet confirms this problem is likely to be solved soon.

3. Audio not working with Dolby Atmos headphones and home theater

You may experience Audio not working issue as well while using Dolby Atmos headphones or home theater. This might happen as the holder can’t configure Dolby accessing the app and Atmos extensions properly.

No fixes are at present, available to solve this bug. As per company pundits, this may take about an entire month to rectify this issue.

After installing Windows 10 1903 Update, there may occur some trouble in the Intel Audio device driver. If that’s the case, you may find intcdaud.sys notification next to specific drivers. As a result, this may start draining the battery randomly.

If you attempt to update your OS using some external peripheral devices like USB or SD card; it may strike following error message-

The Company affirms that the 1903 update may bring some compatibility issues while playing an older version of the BattlEye Game and using anti-cheat software simultaneously.

Unable to discover or connect to Bluetooth devices

Night light settings may not apply in certain situations

After Windows 10 May 19H1 Update, there may exist some difficulty while opting for changes under night light settings.

Microsoft and Intel have also confirmed that this update affects the working performance of a few Camera apps like Intel RealSense, SR300 or Intel RealSense S200.

There is some fault in Qualcomm driver as well on this update. Thus, you may experience arbitrary interruption like- WI-Fi connectivity issue after performing this latest update.

As per Microsoft, there is yet another installation failed issue which exists on Windows 10 May 2019 update when users try to install AMD RAID driver.

You may also encounter interruption while working with certain 3D (D3D) apps and games. In this bug, you will likely obtain non-supporting full-screen on rotating displays.

Microsoft has noted above issues as not fixed except anti-cheat software of which solutions are available. Usage of the newer versions of Anti-cheat programs instead of older ones is the best workaround to opt-out of this bug. The experts are at present, working to avoid bugs that occur in Windows 10 may 2019 update and soon provide the solution.